"It was a no brainer"

After breakthrough World Cup seasons, Andi and Charlie have confirmed that they will remain with Continental Atherton for the foreseeable future. Along with the Atherton siblings both riders have been instrumental in the development of both Atherton Downhill Bikes (in particular AM.200.M) and the new range of Continental tyres launched in April this year.

Andi and Charlie have both praised the close working relationship with the team’s headline partners and acknowledge that the speedy reactions to their racetrack feedback has played a major part in their success. 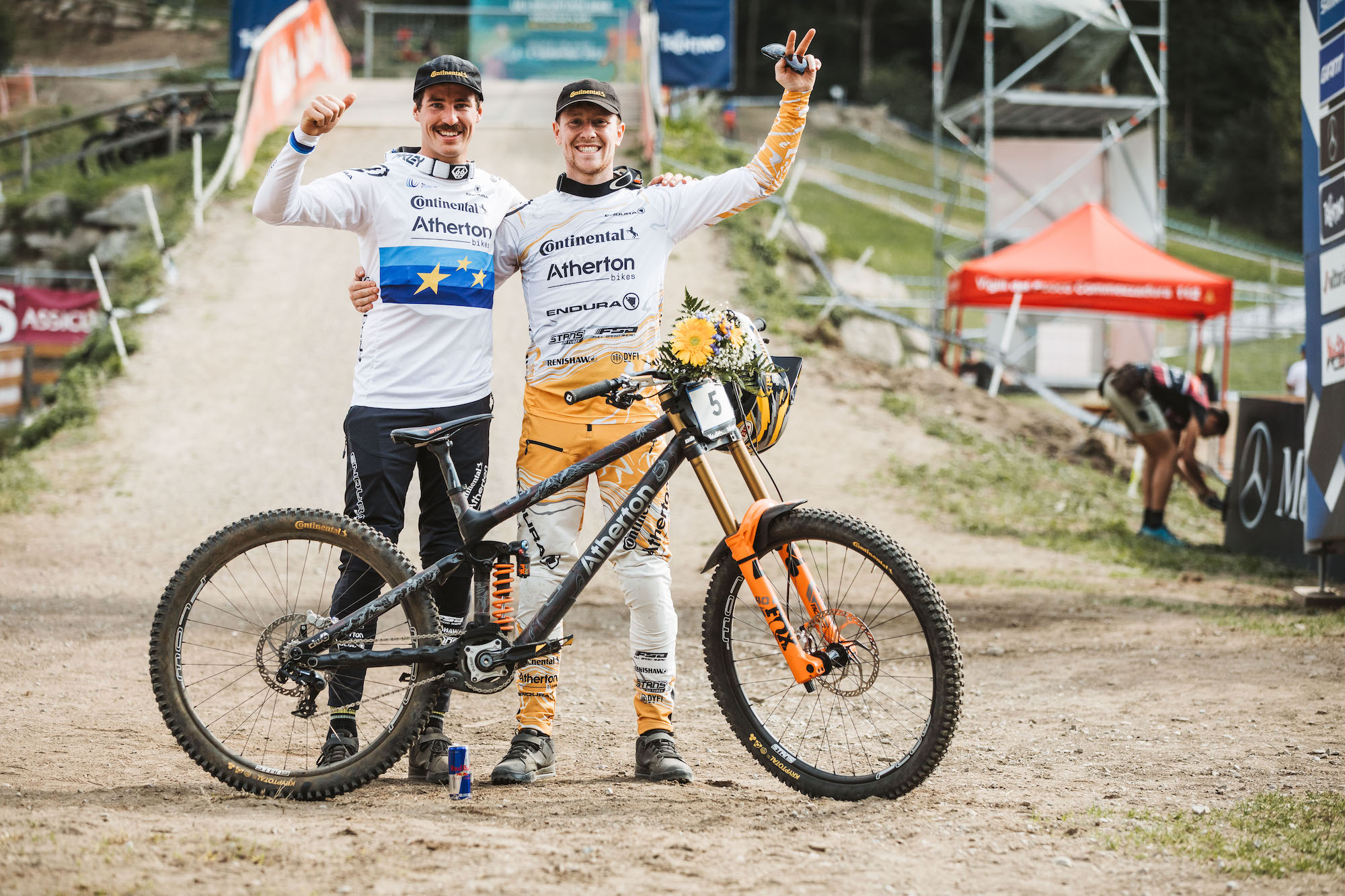 "We're delighted that Andi and Charlie have renewed their contract with Continental Atherton for the next three years. They've achieved truly outstanding results over the last two years and are both growing as top-tier athletes every time they hit the track. Andi and Charlie are also integral to our tire development and testing programmes, with each minute of their training and World Cup expertise informing every MTB tire we create." - Oliver Anhuth, Global Head of Marketing, Specialty Tires Two Wheel Continental Tires 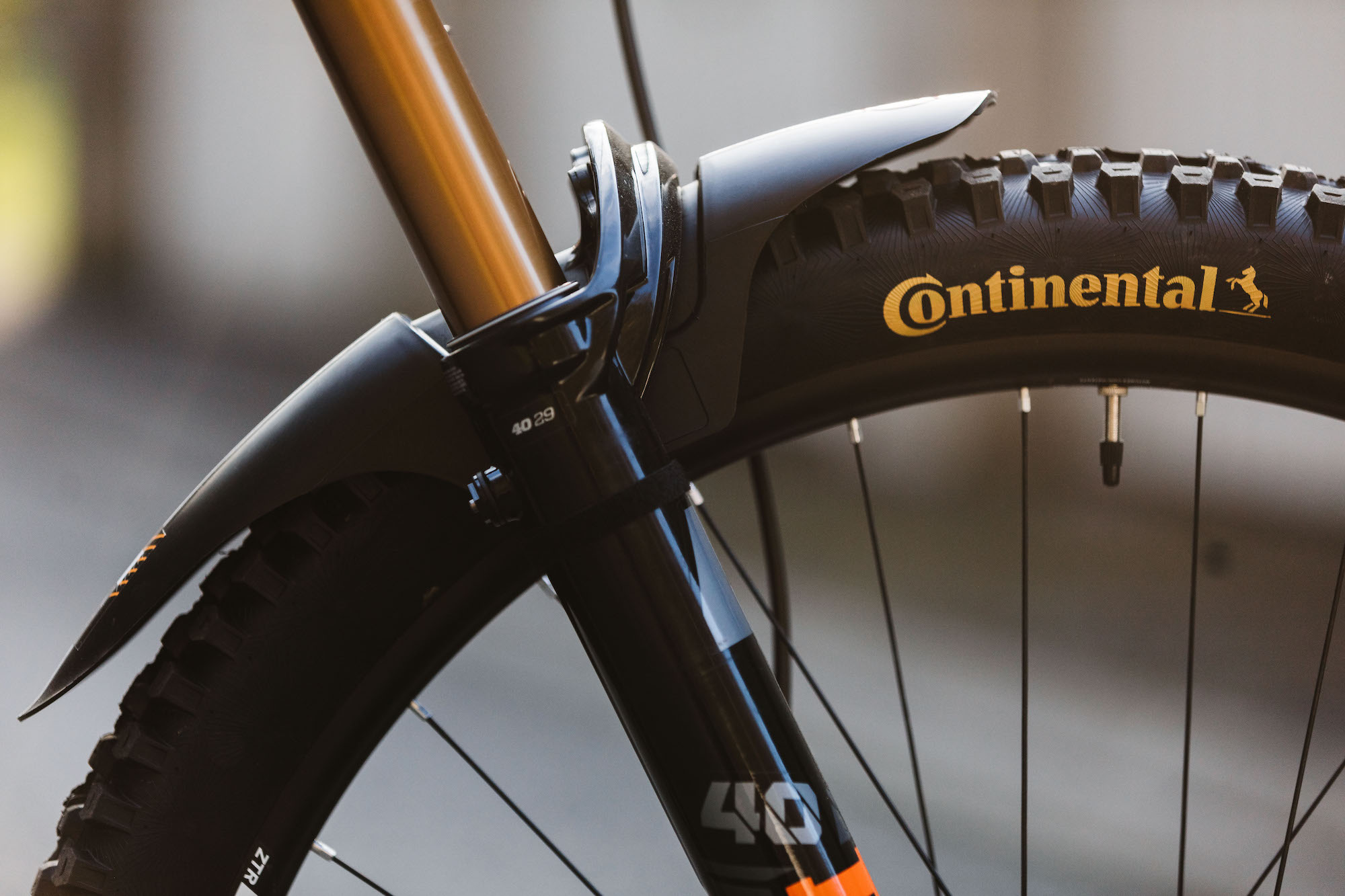 The career bests didn’t stop there! As the season progressed we saw four more World Cup podiums and the European Championship for Andi and a Crankworx win plus two more top tens for Charlie  – including 7th at Val di Sole, the acknowledged hardest track of the year. 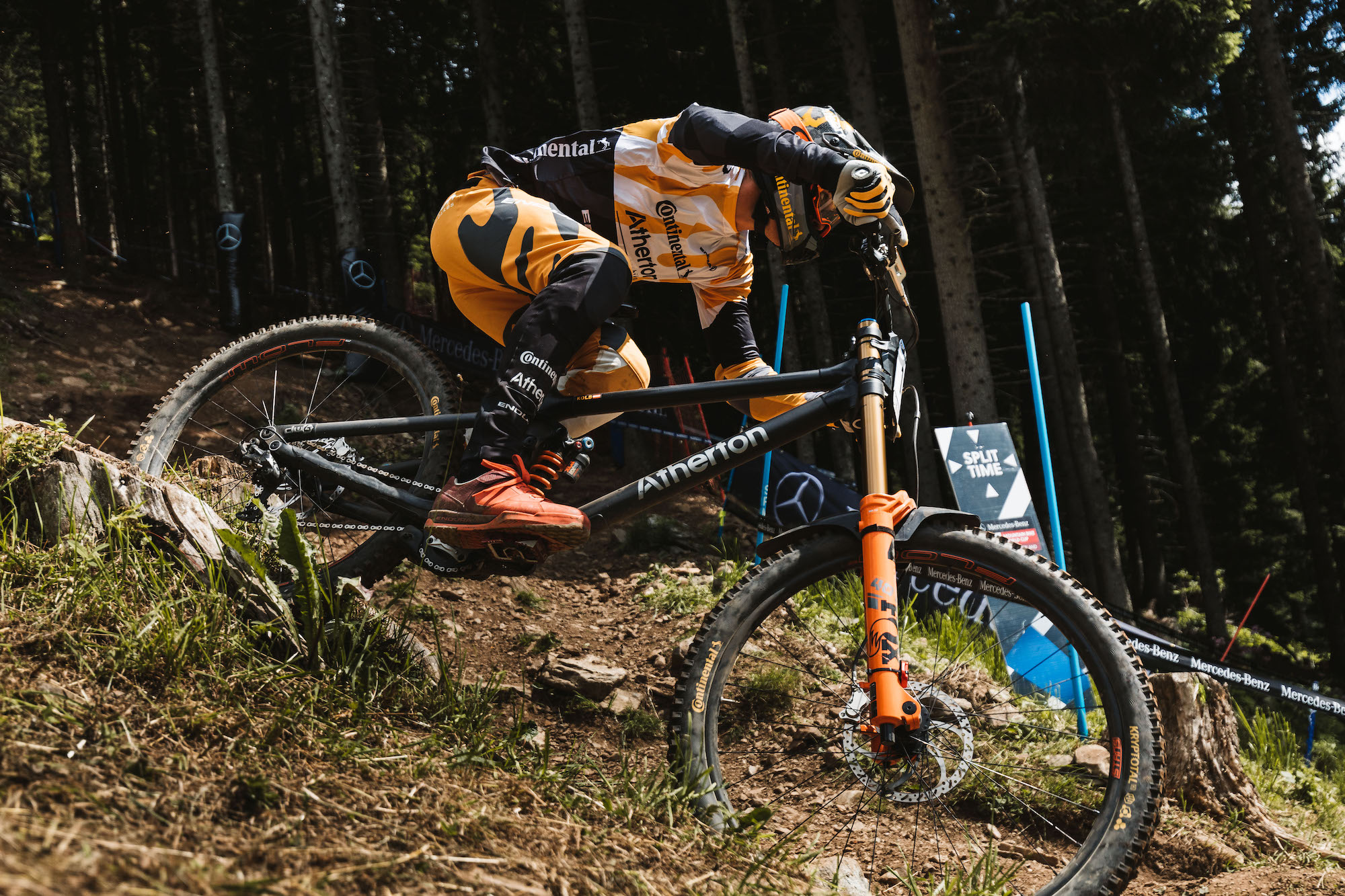 Andreas said “I’m more than stoked to re-sign with the team. In the last two years everyone in the team became like a family member for me. And of course the bike is a big factor too.  It gives me confidence in rough sections and opens up opportunities for more line choices. We definitely have one of the best setups in the circuit. Looking forward to getting together with the team again and see what’s in store for 2023 season!” 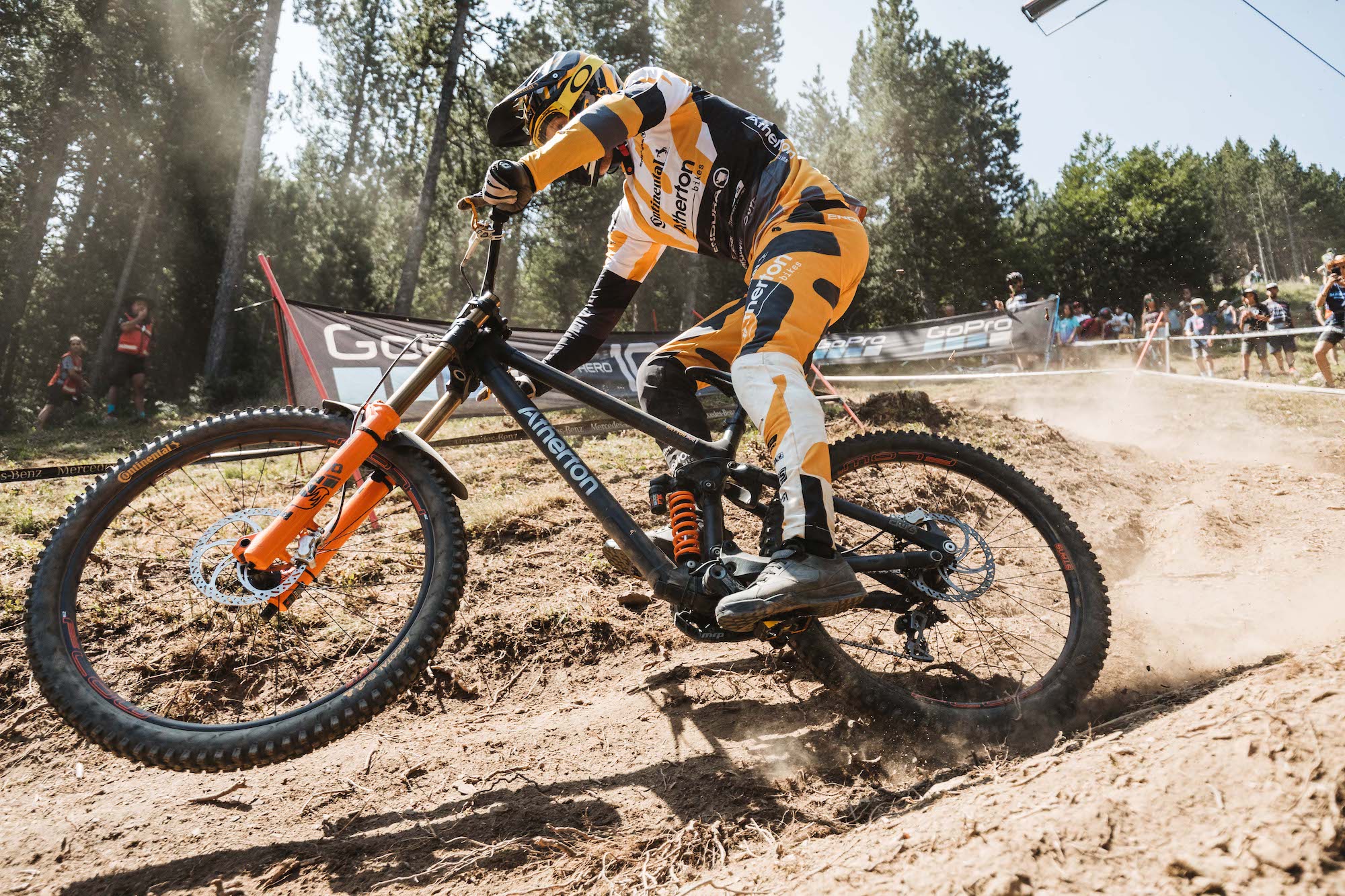 Charlie also referenced the winning formula of the Atherton Bike, Continental tyres and the amazing vibes and co-operation in the pits…

“It was a no-brainer. After my best season to date, the team atmosphere, the whole bike set-up, it was an obvious choice for me to re-sign! I’m really stoked about the up and coming years and I’m already excited to get stuck in. I’m super comfortable on this setup after years of fine tuning and testing different variations. From frame flex to tyre construction a lot has gone into building the bike to where it is today. It’s a big confidence boost as I know there’s been no stone left unturned. That was a big reason why I signed up for three more years! 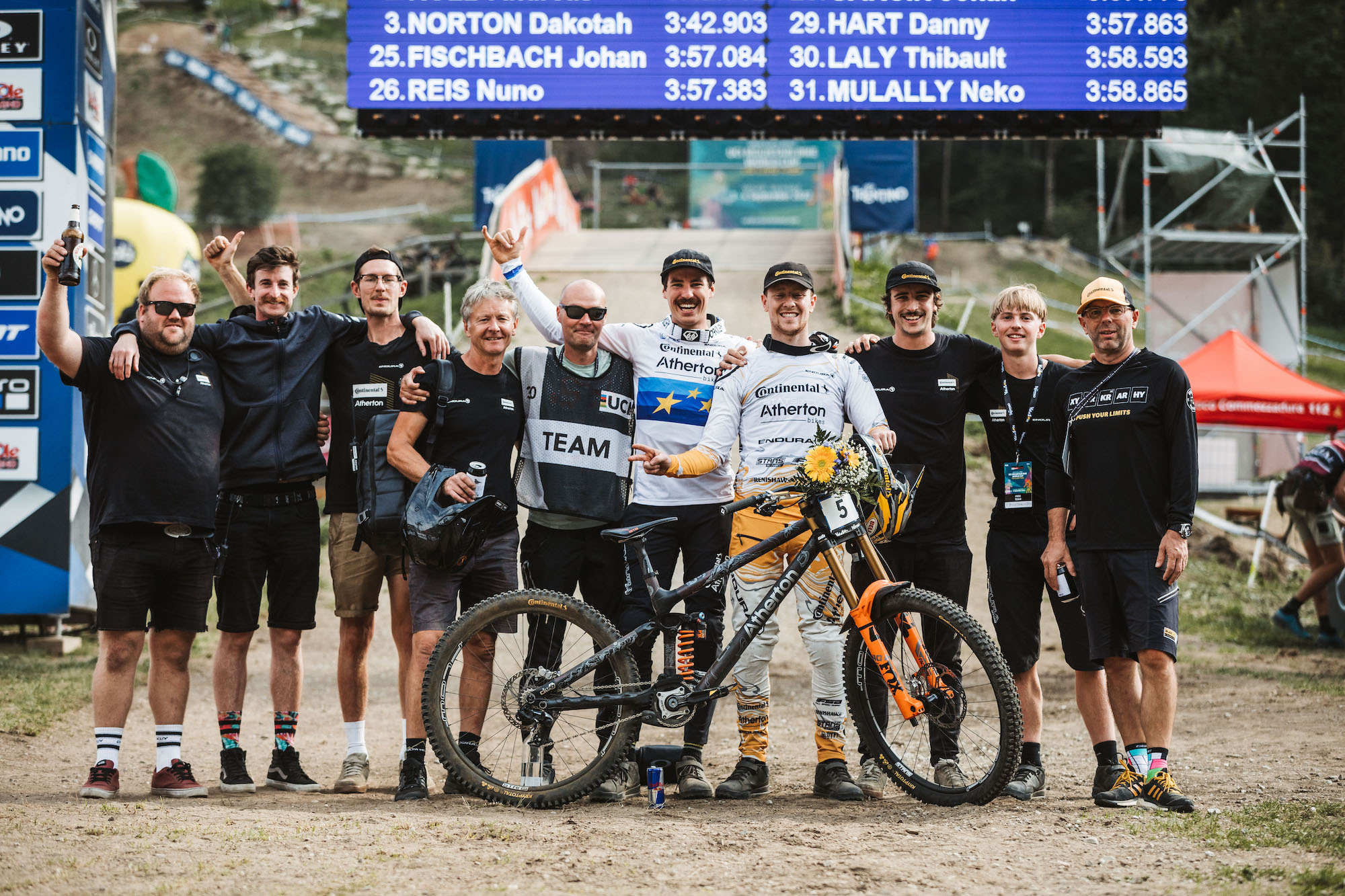 Andi and Charlie will be joined on the World Cup circuit by Dyfi Bike Park’s Jim Monro who will be looking to expand his World Cup experience and to build upon 2021’s 50th place at Snowshoe.  Jim brings a different set of riding attributes to the team as evidenced by his 7th place at Red Bull Hardline and a Whip-off victory at Lenzerheide.

Dominic Platt also remains with the team for his 2nd year as a junior after a difficult first season saw him mainly side-lined by two fractured wrists sustained at Fort William’s Nationals.

Gee is still rehabbing his femur (despite that Red Bull Hardline ride!) But he fully intends to return to World Cup racing for selected events this year. Dan and Rachel remain an integral part of the team with their 2023 events still under discussion.

Team Director Dan Brown said “Last season’s results came off the back of a lot of hard work by a lot of different people, the list is long and varied ranging from family members through a tight-knit and professional support team to material scientists! To see the rise of Andi and Charlie’s riding over the past few years makes me immensely proud, the journey we’ve taken together, supported by Continental throughout, has been a genuine and perfect partnership; securing them for the next three years gives Atherton Bikes the perfect platform to showcase our start-up company’s cutting- edge ambitions.”